Upon entering this restaurant and hotel, it immediately becomes apparent that this is not your typical Los Angeles restaurant.  There are separate sections of the restaurant with dramatically different decors each serving different food:  There is the Rojo room for traditional tapas (the main dining room).  The Blanca room for new wave modern tapas, and then a cocktail lounge.  For dessert, there is another area called the Patisserie which is adjacent to a section selling some unusual functional art pieces (as well as paintings and jewelry) like what you would expect in a museum store or a gallery on Abbott Kinney.   Some of the chairs and lamps play animations and movie scenes.  It’s huge and spacious, lots of glass, mismatched artsy chairs, unusual lighting. The overall effect is quite cool.  We sat in the Rojo room, and were able to order from the Blanca room.  They also had a roving tapas cart (thus the “Tapas 3 ways” I mentioned.)  There is an open kitchen with a clear view of Marcel from Top Chef Season II running around.

We made one mistake, and that was not stopping at the cocktail lounge for a preliminary taste, as we found out later they have a raw bar there with items not on the other menus.

DISCLAIMER:  As I review each dish, you will note that I will pick apart a detail here or there.  The important thing to remember about this restaurant is that perfect taste is not the only goal.  This is just like Iron Chef where presentation and creativity are of equal importance.  We came here not just for food, but for a show.  This was about flavor and texture experiments, about using specialized technique and technology to achieve a unique sensation.  While some of these items perhaps don’t reign on taste alone,  that is absolutely fine.  I love to play with my food, and this is a great place to do it. 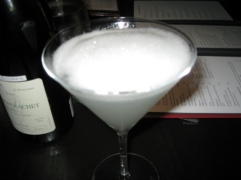 A few of us started with some cocktails – only the funky modern ones, of course.  Cocktail #1 was your classic margerita except instead of a salt rim it has a salt foam on top.  As I am one of those who does lick the glass then sip, I found this new version both tasty and pragmatic. It just doesn’t look good to stick your tongue out and lick the glass whilst dining with friends.

Cocktail two was a dirty martini with more foam.  The olive was the draw here: Not really an olive but rather a constructed olive globule that was formed using both a calcium sodium alginate baths.  It had no olive texture as it was essentially molten, but the taste was of the highest quality Spanish extra-virgin olive oil.  We ordered a few more for the table. (Pictured above.)  The last drink was the most dramatic; a Mojito that had cotton candy on top.  The rum was added to dissolve it into the drink.  The drinks were all quite good.  They should be for $14 each.  The unusual aspect of them was not flavor, it was presentation and texture. 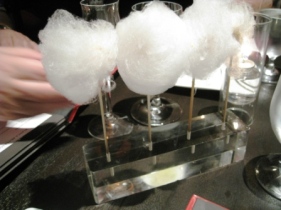 Next, we got to try an item from the rolling cart.  It was described as Foie Gras Pate enrobed in corn nuts surrounded in Cotton Candy.  These actually were one of our favorite items of the night – There was a great play on texture as well as flavor. It was a great combination of sweet and savory and crunchy.  As an aside,we were worried they were going to be very pricey (of course we ordered without asking) but they turned out to be only $4 each.  At that price, we each would have gotten a second one. 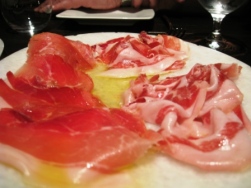 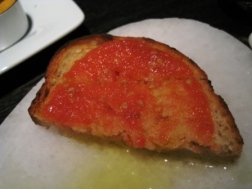 These were simply amazing.  Much more tender and flavorful than even the best Proscuitto.  The tomato bread was also incredible; we wound up ordering more. 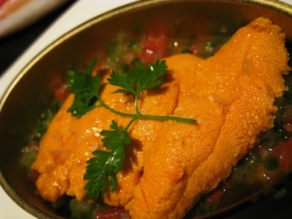 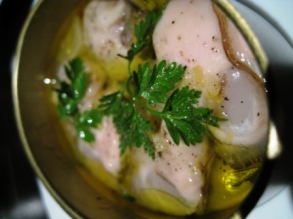 Canning was invented in 1810 in France by Mr. Nicolas Appert. Spain adopted this technique and today is known for producing the best canned products in the world. Here at SLS, we make them in house daily.

Note that this is fresh fish served in a can, not literally canned.  They had other options besides the ones we ordered.  For me, the veggies overpowered the sea urchin. Others at the table who were not uni lovers said they liked the uni in this preparation.   The oysters, however, were a hit across the board.  Very fresh and briney, this was a great alternative to having them on the half-shell.

Moving on to Rojos, or traditional tapas: 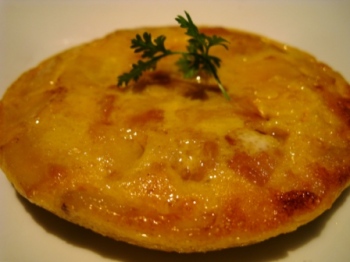 The fried potatoes tasted like BBQ potato chips with mayo.  I did not see the
point.   The Tortilla Espanola is not a tortilla like one would associate with Mexican food; this was basically a fritatta.  Nothing wrong with it, but nothing special either. 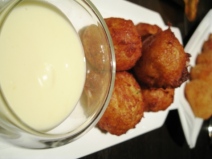 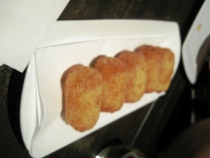 The codfish fritters were the single bad item of the night.  Tasted like frozen fish sticks.  Actually, frozen fish sticks would have been less fishy.  We enjoyed the croquettes but they were no better than what I have had at a decent NJ diner. 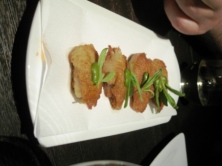 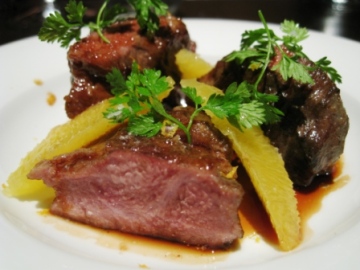 The chicken wings were a great taste, I really liked them with the salty/briny olive puree.  Veal Cheeks:  The technique used on the cheeks rendered them
extraordinarily tender.  We sliced one in half for this picture so you
could see the marbling.

At
this point, we had had enough of the traditional tapas and elected to
move on to the Modern.  We picked out a few but as our waitress was
extremely knowledgeable of the menu, we invited her to choose the best
of the bunch. 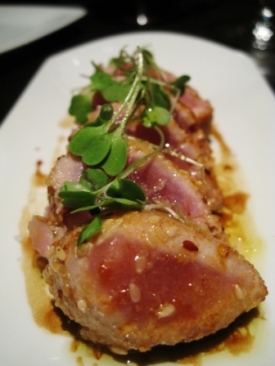 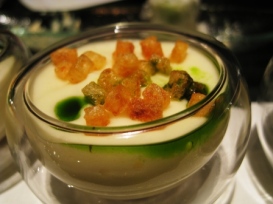 Tuna was not exciting.  The texture was more interesting than the flavor, as they prepared it sous vide and it tasted more like beef than chicken.  It was extremely mild in flavor.   Potatoes:
Another favorite of the table.  The egg is cooked for 24 hours at 63 degrees.  Very much like a custard or flan. 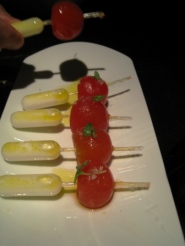 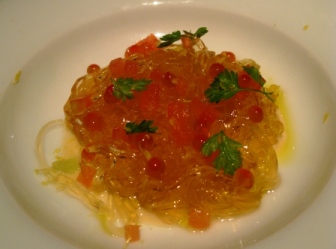 The mozzarella-tomato was very cool and fun.  The idea was to put the tomato in your mouth and squirt the cheese “liquid” after it.  It did have the Caprese effect.

The “linguini” was actually  not pasta but derived from a vegetable, unfortunately I forget which one. THey might have been something like japanese yam noodles.  This dish was a real winner from both a flavor and texture standpoint. 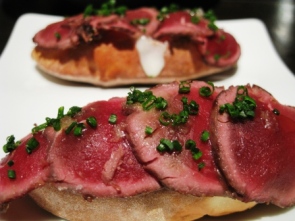 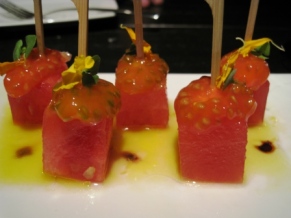 Cheesesteak was a tasty morsel, but nothing all that special.  Don’t let the close up fool you, it was very tiny.

The watermelon tomato skewer tasted just fine, but was a gross abuse of marketing.  This dish was exactly as described; a cube of watermelon topped with tomato seeds.  Not sure what made them sexy.  Perhaps it is sexy to spend $6 for the inside of an out-of-season cherry tomato upsell?  Their profit margin percent on the tomato seeds is probably more than when you add truffles to a dish. 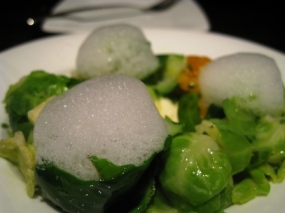 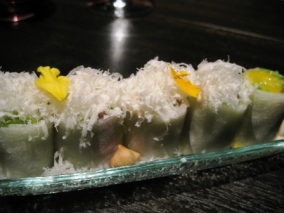 Brussel Sprouts:  MMMM Air.  Actually, we loved this dish.  The brussel sprouts themselves were perfectly cooked; they were tender with no trace of bitterness.   This dish was quite delicious, we ate every last leaf.

Caesar Salad:  Sounds way better than it was.  I think this was a glorified wrap.  Even the dressing itself was weak and lacked the telltale garlic and anchovy flavor.

Time for dessert.  We moved over to the Patisserie and opted to sample many of the options. We also ordered a bottle of Spanish wine to accompany them. 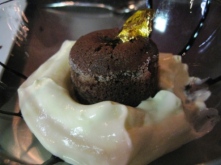 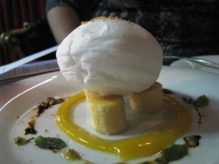 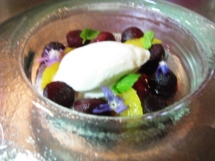 You know, we kind of left dessert up to our waiter.  In retrospect, that was probably a mistake, as I look back on the menu I see a lot of interesting items I would have liked to have tried.  What we had was fine, but nothing rocked any of our worlds.  It was VERY expensive for what it was.  In studying the bill, the prices for the desserts actually seemed disproportionally higher versus the savory items.

Wine list  – All Spanish.  Now, at risk of sounding like a hypocrite, as I recently praised Church and State for only offering a French list, I was disappointed with their limited options.   But in this case, much of the cuisine incorporates a lot of flavor profiles not purely Spanish.  We brought some white and red Burgundy along “just in case” and I was glad I did.  Sadly, the host quoted me $25 corkage and they actually charged us $30 per bottle.  Still worth it.

I also learned later they charged us $32 for water (4 bottles of Evian.)  Come on.  WHen will this madness end? If this is all profit margin for them, shame on them.  If they really are paying these kind of prices to their distributor, then for the good of their customers, the environment, and their own bottom line, they really need to move to a reverse osmosis (RO) system like other forward-thinking restaurants in LA.  I would bet Bazaar is not using $8 bottles of water for cooking and for ice.  If they had RO, then everything would use the “good” water.

Thoughts and Observations:  I can see where this restaurant runs a risk
of being misunderstood.  It’s the kind of experience you would expect
in NYC or Chicago, not Los Angeles.   Some of the dishes elicited more
of an intellectual pleasure than a gastronomical one.  The best analogy
I can offer is the pleasure of drinking old wine, say a 30 year
first or second growth Bordeaux, versus a fat young Syrah like Colgin
or Alban.  I truly love and appreciate both, but in vastly different
contexts.  Unlike the in-your-face Syrah, that Bordeaux is going to
have far more subtlety that requires careful tasting and reflection.
It’s not going to have bold fruit; heck, the fruit might be all but
gone and the taste experience might be more about terroir and other
non-fruit characteristics.  More often than not, my wine-drinking acquaintances who relish
young big reds will taste an older Bordeaux and not get what all the
fuss is about.  Also, even though Jose Andres was a student of Ferran Adria of El Bulli Molecular Gastronomy fame, I have enough interviews in regards to this restaurant that I know he does not like for his cuisine to be referred to in this manner so I have avoided the term.

In regards to the Rojo, or Traditional Tapas, it was all (except for the codfish fritters) good, but not rock your world good.  Just solid.  Our dining partners have extensive experience dining on authentic
Spanish cuisine in Spain, and they were quick to tell us they had much better
versions of the “authentic” Spanish dishes that we ordered during their visit.  If anything, Chef Andres’ interpretations of even the traditional dishes was also somewhat modernized.

The restaurant experience kind of reminds me of Marcel’s experience on Top Chef
Season II.  He suffered a lot of abuse from his fellow contestants and
others on the show (as well as viewers), who, while supposedly foodies
themselves, clearly did not value many of his modern twists on
traditional dishes.  By the end of the season, he did manage to turn
things around for himself for the most part, but he never really gained
full acceptance.  I mention this little anecdote because Marcel of course is now
a chef in Jose Andres’ kitchen, and is responsible for many of the more
creative elements we experienced.  To accept Bazaar is to accept
Marcel.

We had a phenomenal waitress who was extraordinarily
well-trained.  Besides being incredibly
knowledgable about the food, she is also an admirer and friend of
Marcel’s, and shared an anecdote with us.  Apparently, the child-like
behavior did not end with the season.  Ilan Hall paid a visit to Bazaar
and, according to our waitress, loudly dissed Marcel during dinner.
Not cool.

So the question is…will Sushi-Hamburger-Italian
Food-loving Los Angeles embrace a food experience that is quite a ways
off from what makes them comfortable?  I really hope so.

I realize some of my comments were critical, but we genuinely enjoyed the overall experience and look forward to returning to experiment some more.