I love Santa Barbara spot prawns and am used to paying a premium for small tastes of them in restaurants.  I also adore them in the form of ama ebi at the sushi places.  But so expensive and hard to find.  So when I saw a reference on Chowhound to getting live spot prawns at Ranch 99 Markets for a mere $16/lb.  I know what we were doing on Friday!  Bought 4 lbs of the little guys.  They  were nice about giving us a cooler and packing them in water so they could survive the trip home.  Next time I will bring a container, as we got lucky this time that they could accommodate us.

Now the background is that while I certainly enjoy eating tasty animals, I am a bit squeamish about murdering my own food.  Call me a hypocrite, it is what it is.  So I was a bit apprehensive about the preparation of dinner.  But then I found the recipe of my dreams.  Drunken Spot Prawns.  This called for “marinating” the live prawns in chinese cooking rice wine before cooking them whole.  This was a win, as all the other recipes involve knife work with a kicking shrimp, not my thing.  With this recipe, they would die (or at least passout) from drunkeness.  You have to agree this is the perfect death.  Much better than getting boiled alive.

I decided to kick up the recipe a few notches.  Rather than using the $1.99 cooking wine, I wound up using about $20 worth of decent Japanese sake with a bit of Mirin mixed in.  (foreshadowing: this turned out to be a very smart decision) Those were very happy shrimp.  So I “marinated” the prawns in the sake, and they stopped kicking pretty quickly.  Check out the video further down.  By the time it took to get the fish broth/dashi boiling, they were pretty still.  I did them in several batches; they cook in less than a minute.

Eating them was a similar experience to crawfish in New Orleans.  Pop the head off.  First eat the tail, which is very succulent and possesses incredibly fresh shrimpy flavor.  Then suck the head.  Now here was the surprise part.  The marinade really infuses the prawns.  Plus, immersing them in the fish broth for under a minute does nothing to boil off the alcohol.  So it kinda happened by accident that Scot noticed he was getting completely wasted even though he was almost ignoring the nice 1er Cru Chablis I had paired with the prawns.  I am so glad we went with the good sake and not the swill, that would have been unpleasant.

Continue reading below to see some images of the spot prawn dinner as well as a video of the prawns bathing in the sake.

I love LA.  Could never do this stuff back East.

we go to one of the flagship stores:

Before and After…”Marinating” Spot Prawns on the Left, Ready to Eat on the Right 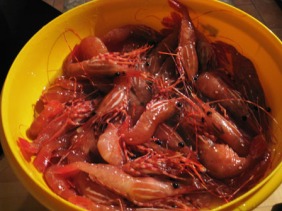 Added some greens, mushrooms, sliced ginger, and gingko to the dashi, sake, and fish broth for a nice soup to accompany the spot prawns.  Quail eggs added to bowl for extra creamy flavor.