I spent weeks researching the perfect restaurants for our upcoming vacation in Miami Beach.  It seemed I was having an especially hard time with the planning because every time I thought I found the perfect place, I would read all the reviews on Yelp or Chowhound and realized it was probably not as good as Gayot, etc. made it out to be.  But I couldn’t believe that in the land of displaced New Yorkers I would have trouble finding great restaurants, so I persevered.   Plus, I had been to the area about four years ago and remembered it having promise.

We had a few (albeit quite expensive) good meals.  But more often than not, we had a lot of overpriced mediocre meals.  And the local policy is to include an 18% gratuity everywhere.  I suspect it is because of all the European tourists who are probably not used to tipping, but I hate this practice.  I typically tip over 20% for good service, and I like the option of tipping less for really bad service, which was not uncommon in Miami.

One of the restaurants, Casa Tua, is considered to be one of the top restaurants in Miami Beach area.  From a food standpoint, Casa Tua really stood out as having beautiful, handcrafted Italian food.  Our rule when travelling is to try to order locally sourced food where possible.  When we ordered the Florida Shrimp pasta we thought we were doing the right thing.  But the pasta (pictured below), which cost around $30, only contained one sliced shrimp, we were a bit taken aback.  It was a delicious potato pasta with a delightful fresh pesto sauce.  But one shrimp? Come on.   Also, the service was so pretentious it was offensive.  We had ordered a 97 Barbaresco which by all rights should have been decanted.  There was so much sediment in the glass I asked the Sommelier to filter it into another glass.  The particles were so tiny that they passed right through the filter, but the Sommelier took the attitude that since there was nothing in the filter that I was wrong to make the request.

Another restaurant was Quinn’s.  Long story short, I ordered the Mahi, one of our friends the Rare Ahi.  I thought mine tasted fishy.  My friend liked mine and we traded entrees.  The next day, he did not feel well and I was fine.  Hmmm.    ALso, my husband ordered the special, a small surf and turf.  Imagine our surprise when the charge for it was $88.  When I casually questioned the practice of not warning us a special was that expensive and suggested that would impact our decision to return in the future, the owner readily agreed and proceeded to ream out the waiter and waived our $40 corkage and then told us not to tip the waiter.  We tipped anyway and got home and found he actually removed the gratuity charge.  Wow, now that is a sign of a bad economy.

Then there was River Oyster Bar in Miami.  It had such great reviews, we paid the expensive cab fare to go back there from Miami Beach.  But other than the clams on the half shell, which were excellent, we found the rest of the shellfish (over 5 different appetizers) just fair.  The sauces tasted pre-made and/or processed.  The bread was stale.  The mussels were very inconsistent in size and doneness.  One of them was bad and it made me feel quite ill for a while.  They comp’d me sorbet to make up for it.  Whoopee.  We left after the mussels and did not order mains.

Another disappointing experience was Shoji Sushi.  This one is especially sad as we LOVED this place four years ago.  Yelpers and hounds continue to name it as the best sushi in Miami, but well, I guess it is all about what it is being compared to.  When we sat down at the bar and I saw trays of pre-cut non-uniform chunks of salmon, tuna, etc., and when we asked for the best fish that night and Seviche was suggested, I knew we were in trouble.   We later spoke to one of the chefs who was there when we were four years ago, and he just kept apologizing and saying something about the economy being to blame for the low-end product.  Huh?

I also need to mention Azul – probably the top restaurant in Miami.  There was real artistry and creativity in presentation and ingredient fusion.  It was very good.  But if I put it against any of the top modern-style LA restaurants such as Providence, Sona, Ortolon, Spago, etc, it would not be in the same league.

Finally, there was one glimmer – Ola, a “Nuevo Latino” restaurant in the Hotel Sanctuary.  Delightful imaginative cuisine.  Again, not rock-your-foodie-world, but fun and tasty.  And definitely the most friendly service we experienced out of all the restaurants we experienced.  Unique ceviches and fish tacos, and a fun “Deconstructed Key Lime Pie.”  Great wine list with lots of reasonably priced Spanish and South American wines. 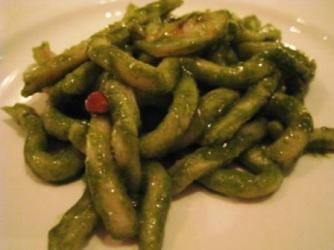 Potato Pasta with Florida Shrimp at Casa Tua.  Look carefully, you can spot the shrimp at the top 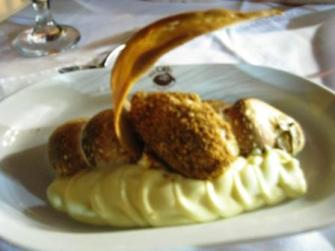 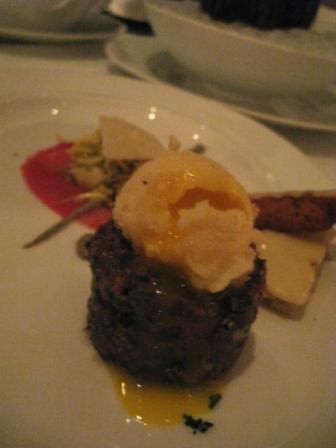 Fried Oysters with a variety of sashimi toppings at Azul

I am glad our focus on this vacation was fitness and massages and not food.  Miami is definitely not a destination for Foodies.