Chef Sada is not only a great sushi chef, he is also a character.  He runs his restaurant with great charisma and genuinely loves what he does.  We loved it so much we went two nights in a row!  At the end of the evening, he cranks up the music and sings along with the Beatles’ Octopus Garden.  This place is definitely a hangout for locals – we are so lucky we found it.

Our request to Sada was relatively simple…we only wanted fish that was locally sourced.  In many cases, we got stuff we simply cannot get in LA.   He did a brilliant job of giving us unique preparations of sushi and sashimi that included Copper River Salmon, Hotate, Halibut, Halibut Cheeks, Kumomoto Oysters, Geoduck, Spot Prawns, and our favorite: Albacore Tuna Belly.

Also, horse is legal in Canada, not in the US.  I noticed he offered that on the menu as well.  We had it in two raw preparations, one as a carpaccio the other as a tartare.  Another thing he did for Scot once he learned that Scot like fish eyeballs (the gel around them is considered a delicacy in many Asian cultures) is he made us a specially prepared local fish called “Kinky-fish.”  (You can imagine the jokes.) It is available only in BC, and is similar to a buttery snapper.  It was poached in a miso/dashi broth and was rich and succulent.

The pictures below are a sample of what we had over two dinners.  Their menu offerings go far beyond what we sampled; he actually does a lot of creative hot dishes as well.  He encourages you to specify your preferences so he can make you a menu around them.

“Cocktail” of Local Uni, Quail Egg, and some kind of foam

Homemade Yuba (Tofu skin and tofu milk.)  Yes, that is a piece of cheese melted on the bread. It works… 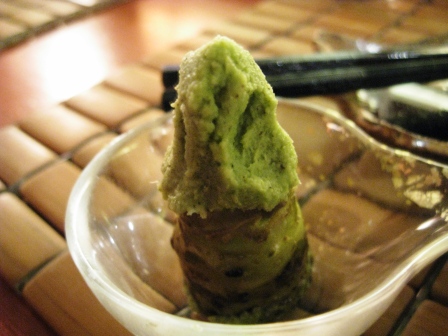 Horse TarTare garnished with some spot prawns:  We actually preferred the carpaccio style. 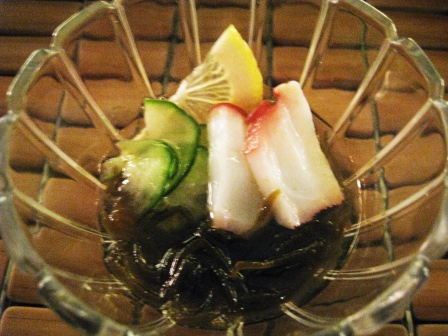 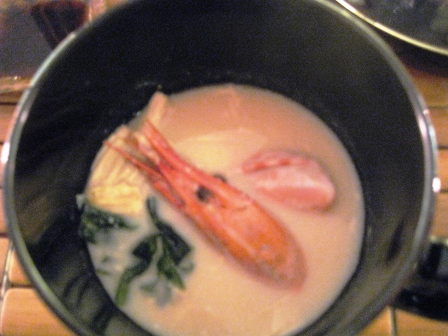 Instead of frying the spot prawn heads, we requested them to be made into a broth.  This one was yuba.  Very comforting and mellow

Dungeness crab rolls. THe one on the left had mago and tobiko, the right was avocado and cucumber.  I like how there was just one piece so it did not fill you up

“Kinky Fish” head.  Sada said this is what he likes to eat.  Our waitress said it is her favorite, and something rarely served to customers. 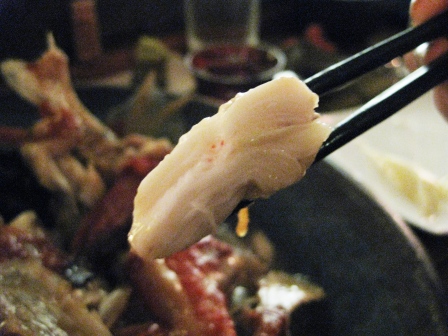 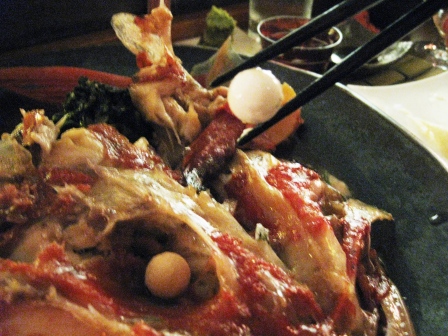 No, you don’t actually eat the eyeball, but the gel around it is amazing 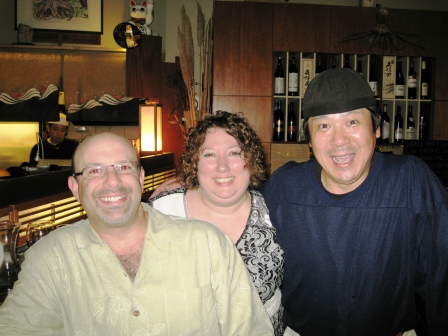 One thought on “Unique Sushi/Sashimi Experience in Vancouver: Octopus’ Garden”