I saw on Eater that Stefan Richter’s (Top Chef) new restaurant was at their soft opening stage a few days ago.  We had to be in Santa Monica on another errand on Saturday so we decided to take the opportunity to check it out for Lunch.  I actually made reservations but that turned out to be unnecessary as they were empty.  They were shocked to see us as they had not yet formally announced their opening.  Go Eater!

The space itself is quite impressive.  It is in the middle of nowhere Santa Monica on Olympic near the studios.  When I first plugged the address into my GPS, the car was determined to take us downtown.  Thankfully, I caught that in time.  But back to the restaurant.  There is a beautiful bar, a huge indoor seating area, then an elegant patio adjacent to the relatively open kitchen.  The patio is clearly the place to be.  The look is a cross between Tavern and Spago.  Comfortable and peaceful setting.  Sinatra and other brat pack music played quietly in the background. 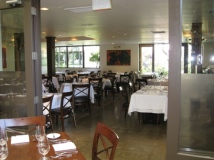 Service was extremely friendly and attentive, no problems here at all considering it just opened.

However, we experienced two red flags right off the bat.  A basket of bread, Grissini breadsticks, and butter was brought to the table.  THe breadsticks and butter were both excellent.  The bread, however, was precut into small chunks slightly bigger than what one might use for stuffing.  While the bread was quite fresh and of good quality, it LOOKED stale and the presentation came across as cheap.

Next problem is the wine list.  For me, lunch on a Saturday means Rose (ideally from Provence) or at least a nice minerally white from Italy or France.   With the exception of a few Champagnes, his list was all domestic, mostly California.  All the non-traditional whites such as Sokol’s Evolution were more on the fruity Rhone side.  Stefan displayed such European sensibilities on the show, I was shocked to see that not carry through to the wine list.   There was not one thing I wanted on the list, and that was a bummer.

The menu mostly had standard cafe/bistro fair, but there were a few interesting standouts.  We ordered two starters and two entrées.

1) Arancini with Summer Truffles and Lemon Aioli – $10:  Foursmall pieces of deep fried risotto. Nice crisp on the outside, but therice was cooked to mush – you could not distinguish the individualkernels of rice and the texture was a bit gummy.  No truffles to be found.    Tasty, but at $10 anextravagance.

2) Smoked Salmon with endive, frisee, and dill vinaigrette potato salad: $16:  6 small slices of smoked salmon were served on top of a pile of cubed potatoes with a stack of frisee on top.  No endive.  This dish presented awkwardly and the flavors did not integrate well.  Because the ingredients were presented in layers, we assumed the best way to consume the dish would be a fork full of potatoes, salmon, and frisee.  The potato salad was VERY heavy on the mayo and pickles and it overwhelmed the subtly-flavored salmon.  This was our least favorite dish.  I think if the potatoes had far less mayo, or better yet a light aioli, this was have been a much more integrated dish.

3) Turkey Burger with Herb Aioli, Swiss Cheese, Frisee, Pretzel bun, and sweet potato fries.  $14 This was a very white sandwich.   The taste profile was very reminiscent to that of a turkey Reuben, probably because of the swiss and the Russian dressing like aioli.  I needed something to break it up, in the way a Reuben has sour kraut.  Perhaps some herbs, tomato, arugula, maybe just a bit of mustard.

4) Mini Mushroom Ravioli with Black Truffles and Foie Gras Sauce:  $19 This was our favorite dish.  Hedonistic, really.  However, until I wrote this, I had forgotten the sauce was described as Foie Gras.  We thought it was a heavy cream sauce and did not detect and Foie Gras flavor profile.  That said, presumably house made raviolis were perfectly au dente and the mushroom filling was delicate and well-flavored.  But it was drowning in a rich white sauce that overpowered the delicate taste profile.  Yes, the truffles did show up on this dish.  I would have preferred the raviolis with a great olive oil and garlic. They simply did not need the heavy sauce.

Summary:  Ok but pricey menu with a few highlights.  High quality ingredients that in some cases were unnecessarily over-sauced.  I think with tweaking the menu will improve, and I also think locals will swarm as the space has a lot of appeal.  I would like to come back for dinner once they get settled. 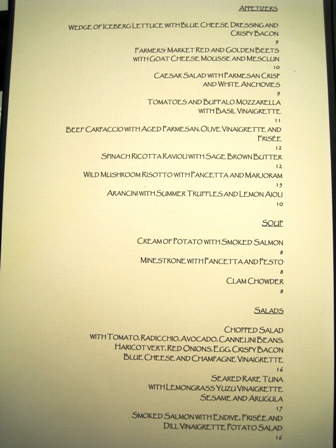