I was lucky enough to get to the Gourmet Warehouse’s first time sale to the public over the weekend.  I had to drive out to Alhambra, fight a crazy crowd, and stand in a TWO AND A HALF HOUR LINE, but with the goodies I procured, all was worth it.  I finally got my hands on food grade Sodium Alginate and Calcium Chloride, the primary requirements needed to make those cool gel bubbles (eg “spherication”) you often are finding at restaurants who have been experimenting with this science.

So I started searching for some basic recipes in order to master the proper chemical proportions.  First problem – my kitchen scale only goes to the gram, not to the 10th of a gram, thereby making it quite challenging to measure out the proper amount of ingredients.  This is especially embarasing for me being that I worked for Mettler-Toledo, the largest scale maker in the world, for over seven years.  I should have anticipated this problem when I bought my $60 no-name scale way-back-when.  So I sent my husband off to Ebay to find a gem scale or similar.  In the mean time, I wanted to find something I could try now, being that I have issues with immediate gratification.

After searching Google far and wide, I finally found a few recipes that used measuring spoons and not weight.  (Thank you Surfas.) I knew it would not be perfect, but maybe I would at least get a feel for it.

I had some beautiful Maguro (tuna) in the fridge.  I cubed that and tossed it with some sea salt and shiso and tarragon from my garden.  Then I put some chunks of avocado mixed with some minced chili and lemon juice in the center of the plate.

But I wanted some kind of cool gel-ball as a topping.  I toyed with many options – olive oil, herbs, lemon juice…then the tomatoes I picked from my garden caught my eye.  I would make tomato spheres.  Now I needed a basic recipe so I could glean proportions.

After reviewing tons of recipes, I observed that it was important to have a very smooth puree with the right viscosity.  I decided to take my immersion blender and puree the heck out of the (raw) cherry tomatoes.  Added some nice extra virgin olive oil, sea salt, meyer lemon juice, and a bit of cayenne.  Hmmm, very thick.  I didn’t want to add water as I was going for flavor.  Decided to thin with Vodka, thereby essentially making a bloody mary topping.

In the meantime, I dissolved 1T of calcium chloride into 5 cups very hot water.  It is very important to note that you do need to use water with low calcium as you want a lower pH.  I happen to have a Reverse Osmosis system that removes minerals like calcium, so I just went with that water, again, crossing fingers. 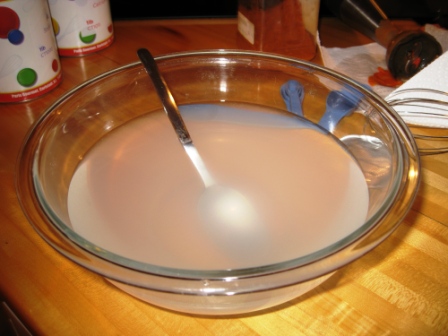 I strained the liquid through a cheese-cloth lined strainer.  Added more vodka to thin it out a bit more, and brought the final volume to 15/8 Cups in a 4 cup glass measuring cup.  I put the measuring cup into a water bath and heated it up to a simmer.  Then I added the 3/4 t Sodium Alginate and quickly whisked it in.  Now I was ready to go.

Not having a syringe handy, I poured the liquid into a squirt bottle.  Then I attempted to squirt drops into the calcium chloride solution.  I guess I was overzealous with the vodka, as the final mixture was so thin it basically poured out.  Still, I did get little gel balls, which after sitting in the bath for 1 minute I quickly washed off with water. 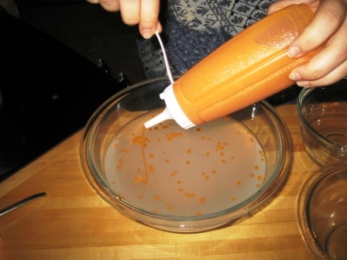 They were much more firm and hardy then I expected.  The flavor was
definitely bloody mary.  Good essence of tomato, vodka, and spice.  The
diameter of the spheres was only a few millimeters.  Plus, they did not
really burst with liquid.  The texture was good, but not great.

While
I knew my chemistry was incredibly inexact, I decided to put the blame
on my now too-thin tomato solution.  So I dissolved some arrow root
into some water and added that to the tomato to thicken it a bit.  You
know, I saw the Xanthan gum at the store, but thought that was over the
top and skipped it.  Bad move.  I guess the arrowroot was a reasonable
substitute, it did thicken it somewhat.  I did, quite by accident,
produce bloody mary pasta.  The texture was just like the yam noodles
you get at the Asian grocer.   Now I am wondering if they are produced
with a similar chemical process.  I need to look that up.

My husband suggest the old cut a whole in the corner of a baggy trick.
I got some bigger drops, but as you can see, that technique was better
suited to bloody mary funnel cake.  I tried using a small teaspoon to
drop larger “drops” of liquid into the bath, and I did sort of get
larger spheres.  But the texture was too gummy and not liquidy enough.

Well, enough experimenting, the tuna was waiting.  I put the original spheres over the tuna and avocado as topping.  My husband and I both really enjoyed getting the tomato accent this way – the dish did convey a nice mix of texture and flavor. Had I used a regular tomato salad it would have been watery and would have taken away from the tuna.  The spheres did not pop with juice, but they were certainly more liquidity than boba (tapioca).  I think the recipe really has potential as the bloody mary accent on the tuna and avocado really worked.  It is just the texture that was wrong.

I think my texture issue was one of inexact chemistry.  Even though I was a biochemistry major, I never liked all the precise measurement.  That’s why I am not a chemist any more.

But now it is time to bring back those roots.  First, I need a scale.  And some syringes. Maybe some pH paper.  And perhaps that Xanthan gum.

More on this story once I have the proper equipment.